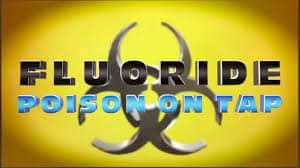 Another government driven crime against humanity.

On this issue of fluoride, the Australian government ranks as the world’s most criminally corrupt crime gang of the modern era. All authentic science unequivocally condemns this evil practice. The neurotoxin of hydrofluorosilicic acid is equally as toxic as arsenic and lead and should never be added to public water. After reporting water fluoridation as a crime-in-progress to the WA police my request for remedial action was promptly dismissed as not being a police matter. This arbitrary response furthered widespread alarm among the mass of citizenry deeply concerned with the demonstrable crime of water fluoridation. Any claim that this community concern of a crime-in-progress is not a police matter is conspicuously incorrect since the primary purpose of police is the prevention of crime. So far as I’m aware police do not exist to protect crime but rather prevent it. Or at least that’s what we the public pay them for. Sadly they now exclusively function as predatory corporate mercenaries.

The deliberate poisoning of public water with hazardous toxic industrial waste under the internationally discredited pretext of improving dental health is the most monstrous crime imaginable. It’s a known criminal scam perpetrated by criminal scum. Reliable studies establish a causal link between fluoridation and cancer, genetic damage, neurological impairment and bone pathology. This incontestable evidence has resulted in 98% of the world banning fluoridation reinforced by the world’s foremost authority on dentistry, the international academy of dentistry, oral hygiene and toxicology; emphatically condemning the dangerous practice. However evil has no regard for truth and will stop at nothing to destroy it.

Further peer-reviewed independent studies link fluoride exposure to unsightly dental fluorosis, lowered IQ in children and measurably worse. Vicious socio-psychopaths inflicting this evil upon the Australian public against the overwhelming majority will and in the full knowledge of the proven harm is unmistakably a criminal act. Not only is water fluoridation a malicious crime but is described by leading experts as the most massive and far reaching scientific hoax in recorded history. The Covid-19 scam now equals that shameful metric.

Furnishing police with incontestable evidence, I’ve posted by registered mail a leading scientific literature review by Dr Geoff Pain confirming beyond doubt the clear and present danger presented by water fluoridation. Also enclosed is a DVD documentary representing just one of countless investigations, comprehensive studies, books, expose’s and video documentaries establishing the criminal nature of this unmitigated evil. This indisputable evidence is presented to the WA police department, Minister for health, Attorney General’s Office and the minister for water as an official reporting of a crime-in-progress. Unsurprisingly no remedial action will ensue from agencies mandated to protect public health. In a satanic inversion agencies mandated to protect health do everything they can to impair, degrade and destroy it in a program of ongoing genocide.

The established proof of harm lawfully demands the immediate banning of fluoridation followed by prompt, purposeful and effective police investigation. Mounting an unassailable case against this obvious crime would be effortless, but police investigators criminally ignore their oath of office to serve and protect the public. Instead they refuse prosecuting this obvious crime. Police no longer serve the Australian public but are co-opted to function as a mercenary force of predatory parasites shielding the plunder of global corporatism while actively covering up the malevolent crime of fluoridation – and much else besides.

When seeking to enforce fluoridation against emphatic public objections government thugs use the Delphi technique at meetings in order to ensure a pre-determined outcome which unfailingly overrides community objections. I’ve attended a number of these government-sponsored meetings which are falsely advertised as ‘community consultation’ but in reality are contrived to stifle public opinion to unlawfully railroad the crime of water fluoridation. The rule of law will only be restored through enough noble minded people using right intention to make it happen.