Benjamin Franklin once said: “Those who would give up essential Liberty, to purchase a little temporary Safety, deserve neither Liberty nor Safety.” What does this really mean and how is it relevant now you may ask? When the 2018 Commonwealth Games on the Gold Coast kicks off we’ll see first hand what it means.

The true motivation for Franklins epic quote is still being debated to this day. But it’s eerily accurate when applied to the state of affairs we’re in to this day. In essence you could say that people who say it’s ok to sacrifice a bit of your freedoms like your right to privacy for example in exchange for security and safety by the government deserve neither of those things.

People are too willing to give up a few freedoms here and there for more and more laws clamping down on our civil liberties all under the guise of things like protecting us from “terrorism”. Interestingly the original Oxford English definition for the word terrorism was ‘Government by Intimidation’. Now ask yourself, do you feel intimidated by our government?

The 2018 Commonwealth Games on the Gold Coast here in Queensland Australia will be great for the local economy and help to give a face lift to this already bustling tourist destination. But it will come at a price.

Queensland Police will be given the power and capabilities to scan entire streets with X-ray trucks, search people, vehicles and buildings without warrant while deploying firearms.

That’s right folks if you happen to be in an event precinct walking the streets or sitting in your car or perhaps on the toilet in a building the police will have the ability and equipment to X-ray you without your permission! They need only alert you to the radiation risk beforehand. But does that leave us with the freedom to decline the scan it we don’t wish to be irradiated? This is unclear as yet.

What happens for example if you just so happen to be in the same location each time the X-ray van drives past and scans you several times over the course of the games? This increased exposure to X-rays can have long term negative health effects such as increased risk of cancer. According to the Mayo Clinic…

Some people worry that X-rays aren’t safe because radiation exposure can cause cell mutations that may lead to cancer. The amount of radiation you’re exposed to during an X-ray depends on the tissue or organ being examined.

The police will indiscriminately scan whole streets or buildings and anyone walking past. There will be no care taken to scan selected human tissues or organs. What if a pregnant woman ends up being subjected to multiple X-rays by the police? Do the potential health risks and loss of health freedoms outweigh the need to be safe from terrorism?

Some of these new totalitarian powers will end when the games do. I reiterate, some. Not all. It is also unclear which new powers will be permanent.

There are far too many unanswered questions and not enough public consultation with regards to the implementation of these new overreaching police powers.

“Given the increasing threat of terrorism and the attractiveness of large public events as terror targets, it is expected that police officers may more frequently use the search powers in the Major Events Act to ensure major event areas remain as safe and secure as possible,” said Police Minister Mark Ryan.

So does this mean every Broncos home game or sold out AC/DC concert is also an attractive target for terrorists? By their definition it should be but they aren’t are they. There isn’t a real threat until a real threat is made. It’s all hyped up so the public buys their narrative of security over Liberty. The same thing happens all over the world and will keep happening until there’s no Liberties left to take. 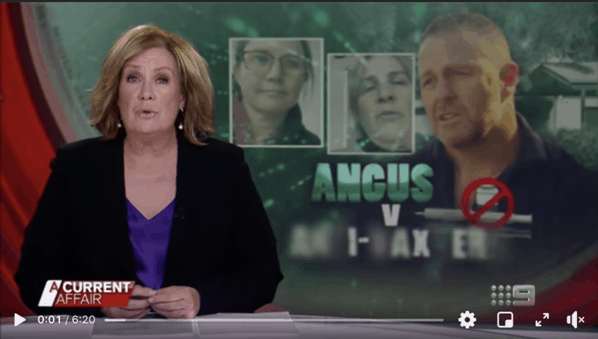 The globalist scripted shills of gutter-TV’s 60 minutes plumbed new depths of media ignominy via their unconscionable hit piece on Meryl & Aneeta of the AVN’s VAX bus tour. Anyone still hoping for a shred of journalistic integrity from this hateful propaganda arm of the deep state needs an urgent reality check. Such scurrilous character…